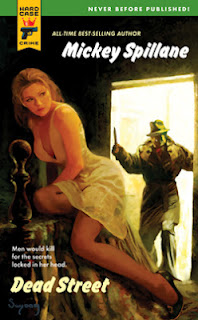 I used to read lots of Spillane when I was a kid, but got quickly bored with his cartoonish Mike Hammer (and instead endlessly re-read Chandler). Revived some interest when they were showing TV series and few years ago I was actually stupid enough to buy DVD box-set of second season but put damn thing on the back of the shelf after watching couple of episodes. Yes, it’s that bad (+Shannon Whirry is no Tanya Roberts). After that I lost even that little interest I’ve had in Spillane and was quite surprised last year when I ran into his recent book Consummata (also co written by Max Allan Collins) when browsing my local bookstore. I had no idea he was still alive and decided to give it a try, for old times’ sake. And to be honest, was probably lured a bit by another of those great Hard Case Crime covers (She consumed man like fire – but what a way to burn). Anyway, I’m glad I did because it is quite good.
So this brings me to Dead Street, his final novel. This one was not written in collaboration with Collins, he just finished it. As he writes in the afterword, Spillane wrote 8 of 11 chapters and he only made “some minor editions and continuity corrections”. I think he’s just being modest and is trying not to stain reputation of his late old friend, because this thing is just a total mess. I’m really sorry to say that and was trying hard to like it, but it is just plainly bad.


Our hero, retired NYC cop Jack “The Shooter” Stang is basically twin brother of would-be retired Mike Hammer with same simplistic black & white view of life and “I, the Jury” sense of justice. Only times have changed and instead of communism this patriot’s homeland is threatened by Arabs (still with an A-Bomb of course). And we are living in digital age now with computers and mobile phones, but he – needless to say - still prefers old skul methods. Macho and slightly misogynistic (or slightly infantile if you ask me) attitude towards tender gender is now replaced by almost senile one. Check this:

“Jack, are you in love with me?”
“Incredibly so,” I said. “Now, may I ask you something?”
I didn’t have to repeat her question at all.
She simply said, “Incredibly so.”
We both had our eyes closed when I kissed her. We were blind but all-seeing and now we had the world in our hands.

But all of above is okay and something you really expect from (ageing) Spillane. What’s wrong with the Dead Street is total lack of rhythm, narrative and plot. For the first five chapters it just doesn’t move anywhere. We are following some ridiculous entanglement about girl supposedly died 20 years ago, now miraculously found, but blind and with amnesia and definitely with some sinister background. I guess there will be people who would praise this as superb foundation for events to unfold and plot to tighten, but to me it was just boring. Not much suspense there. Felt like reading some drama about middle-aged guy re-connecting with his old love (and her dog, to make matters even worse).

Fifth chapter ends with “Nuclear devastation. And only a retired cop and a blind beauty to stop it.” And at this point story explodes and quickly falls apart. We are driven into old sub-plot, new characters are introduced, bunch of indices turns up, our hero starts flying between Florida and NYC. Sounds good, but it’s really confusing and I guess these are “continuity corrections” Max Allan Collins tried to fix. So in short, couple of shoot-outs later and one retired dirty cop less, New York is saved from atomic bomb and Florida coast is cleaned from South American drug dealers. And my Spillane history is closed for at least few more years.

Hero:
Jack “The Shooter” Stang (probably because he stings, but you have already figured out that, right?), retired NYC cop

Location:
starts on the “Dead Street”, NYC and unfolds in Sunset Lodge, Florida

Dames:
Bettie, Shooter’s lost and found love. Now blind and with amnesia, but it doesn’t take long to fall again for our hero

“I saved your life six times today.”
He squinted at me. “Six?” “Once in that cellar, and five times in this room when I talked myself out of killing you.” [The Coolest!]