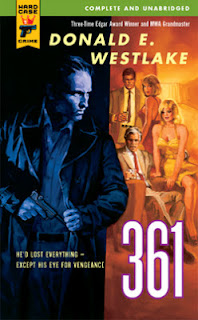 Novel starts with quoting Roget’s thesaurus of words and phrases explaining us that .361 stands for “(Destruction of life; violent death) Killing”. Promising! And it delivers in that tone as the beginning is quite violent indeed, because after only two chapters our hero is left without one eye and half of his family! He is an ex-marine who had just checked out of uncle’s Sam services and gets immediately drawn into this “clueless ordinary guy in a wrong place at the wrong time” type of plot. Pretty soon he gets sidekick by his side (his brother) and together they head to the big city to solve the mystery and get revenge. So far very good – real page turner I really enjoyed hoping that plot doesn’t get too complicated. This might have happened when hero visits public library and suddenly gets bunch of information about some people involved in events that took place few years back.

But sadly it goes in completely opposite way. From being hard-boiled whodunit/revenge crime story it turns into drama about lost young man in search of himself and his father. I do exaggerate a bit and there is a good twist of the story that gives glimmer of tension and suspense, but still second part was major disappointment.
It has qualities. Donald Westlake is a master and his writing has just the right amount of slang, darkish mood (lots of boozing in hotel rooms!), good descriptions and interesting enough characters. Unfortunately I find the plot very weak and novel feels like it was written by half and then author just wasn’t quite sure how to take it further.


Body count:
2 immediately, 5 or so later

Locations:
New York, 200 hundred miles upstate and back to the big apple for final conclusion

Cool lines:
“You won’t get away with this”, he said. But he was gabbling. It was just a sentence you say when people push you around and get away with it.

I looked pale and young and unready. The gun barrel was cold against my hairless belly. I was a son of a bitch and a bad son.
Posted by Jure P. at 12:48 AM